Hydroponic lettuce production in the United States now encompasses a wide spectrum of lettuce types and cultivars. Although there is an increasing amount of diversity in the cultivars being produced in hydroponic greenhouses, Bibb cultivars still occupy a large percentage of the market. They are also often the first crop produced by many beginning growers around the country. While some growers tailor their cultivar selection to seasonal conditions, many growers at a variety of scales produce a single cultivar for the whole year that is adapted to a range of conditions. Both of these production patterns, though, require the growers to be familiar with the growth habits, characteristics, and productivity of the cultivars. This trial was designed to evaluate a selection of Bibb lettuce cultivars through a range of late fall and winter conditions to evaluate their potential for greenhouse growers in the Midwest and northeast. Cultivars were obtained from a variety of seed suppliers to represent a broad selection of cultivars available to lettuce producers.

Primed and pelleted seeds were seeded by hand in pre-moistened 1” x 1” x 1 ½” rockwool cubes. Seeds were germinated in clear water in seeding trays in the nursery. Nutrient solution was added in the nursery 7 days after seeding. Seedlings were produced in flowing nutrient solution in the nursery for an additional week to two weeks before transplanting. After transplanting, lettuce plants were grown out in the channel for four to five weeks prior to harvest. The first two runs were carried out on the typical summer schedule (2+4 weeks) while the third and fourth were carried out in a more winter schedule of (3+5 weeks). The nutrient solution was continually cycled through the CropKing Fertroller where automatic pH and EC adjustments met programmed solution set points. The pH was maintained at 5.8 by the addition of dilute sulfuric acid. EC was maintained at 1.8 by the addition of concentrated fertilizer solution and source water.

* It is important to note that these trials were carried out over set periods of time and harvests were made regardless of plant readiness for sale. Clear comparisons were the main goal, and this resulted in low weights for some cultivars. Also, no supplemental lighting was used after transplanting even under these low light northern conditions. In a commercial operation, more time would have been give these heads to reach a saleable size or lighting would have been added to increase growth rate and crop quality. 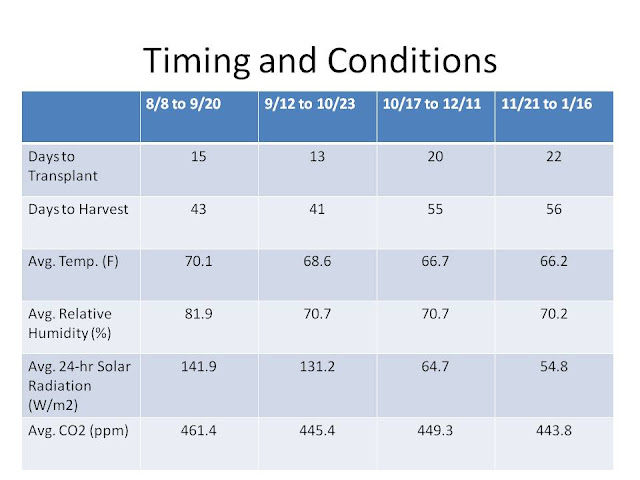 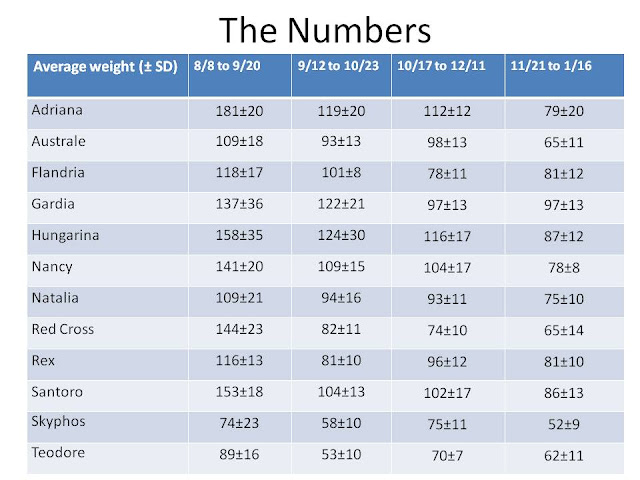 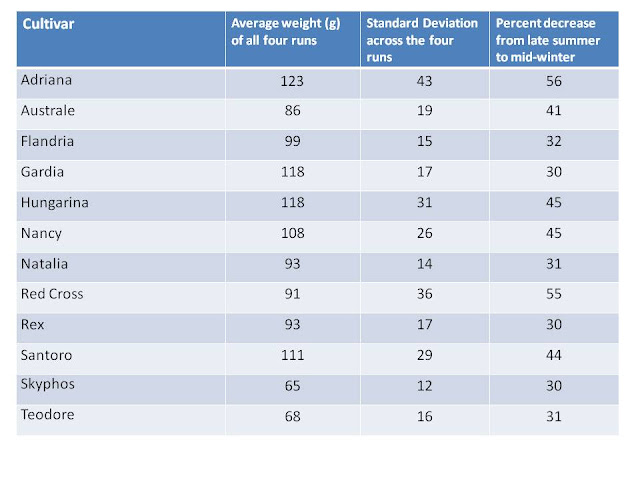 As I look over these interesting numbers from four consecutive runs of this Bibb lettuce trial, there are a couple thoughts that jump to the top of my ‘important take-home points’ list.

The first and likely most glaring message is that light, not surprisingly, is pretty important for lettuce growth and quality. As can be seen by the average solar radiation and weights in the previous tables, low winter light in northern climates can be a significant hurdle. It is clear that lengthening production cycles by two weeks in the winter didn’t produce similar sized heads to the late summer/early fall run. The fourth run had just a little more than 33% of the average solar radiation present in the first run (In future blog posts, we will break these numbers down to daily integrals). Average temperatures in the first two runs were a little higher as well (due partly to solar gain). However, the individual contributions of light and temperature are difficult to clearly separate.

The pictures that follow drive home the point that light/temperature relationships are crucial for lettuce growth and development. Supplemental lighting would have changed this equation substantially, but that is another broad topic altogether. Also, additional time in the channels would have made many of the smaller Bibb heads quite marketable. Production timing and seasonal factors should not be overlooked if your goal is to produce consistently sized heads throughout the year in northern climates.

The second important theme that is apparent in these yield numbers and the pictures that follow is the need to understand the variability in cultivar performance. While all the cultivars trialed here were bibb or butterhead lettuce, not all were bred for hydroponic or greenhouse production. In controlled environment production, consistency is key. Consistency is important not only within a harvest period, but also through the seasons. The second yield table shown above illustrates this point. The deviations across the 4 runs as well as the % weight loss from the highest yielding run (1) and the lowest yielding run (4). It is clear both in these variable yields and in the photos below that in our location without supplemental lighting, some of these cultivars are not suitable for year-round production. The larger framed lettuces tended to be the most variable across runs and were visually the least appealing under winter light conditions while many of the bibbs bred for greenhouse production were more consistent in weight and visual quality across the trials. These trends held true in both the green and the red cultivars.

Knowing your cultivars is crucial in creating an appealing and consistent product throughout the year! 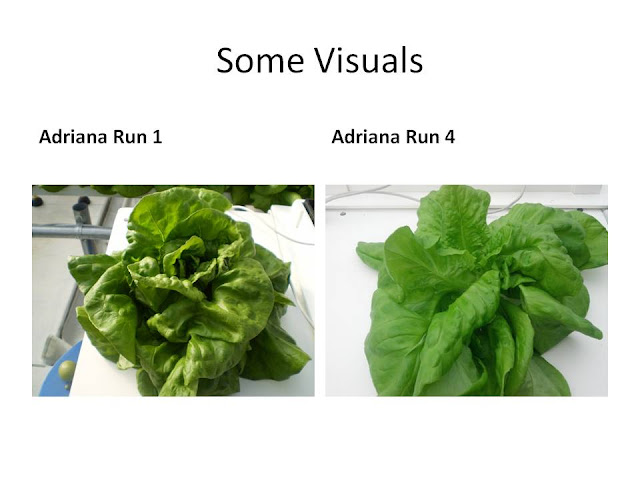 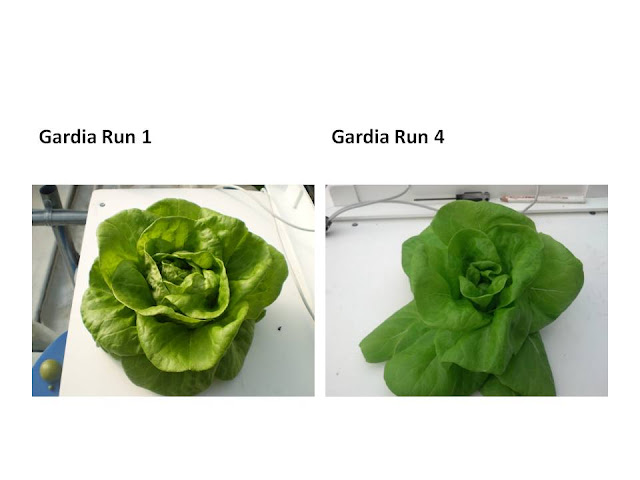 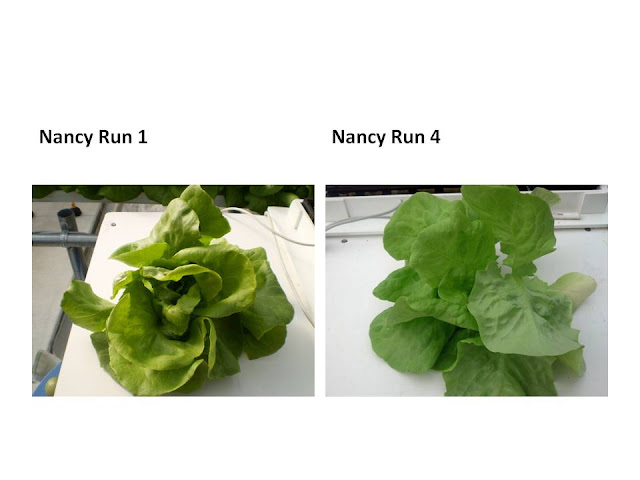 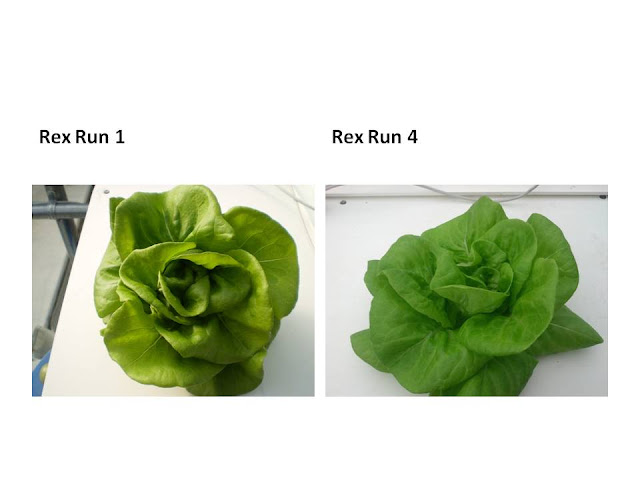 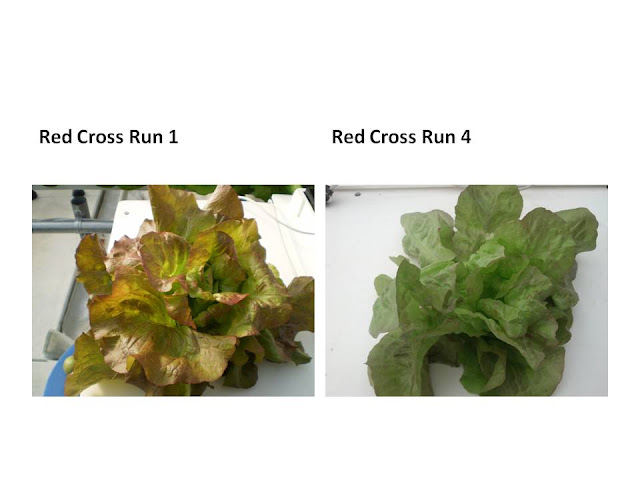 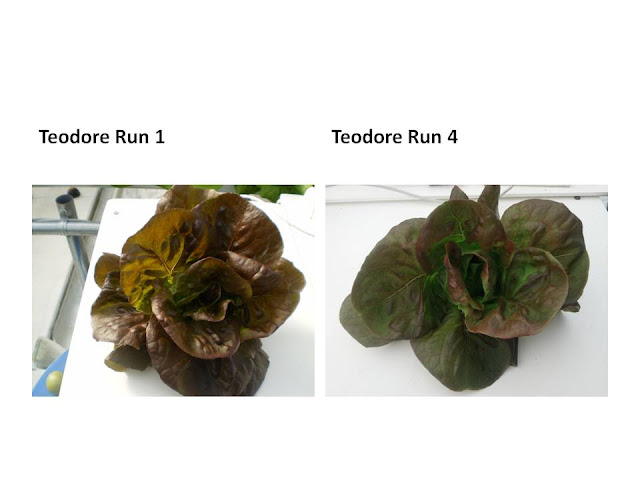