Maxwell originally wrote this article as a feature in Maximum Yield magazine to introduce the concept of hydroponically sprouting cereal grains for animal fodder. We thought that this would be a great first blog entry and hope you enjoy!

With hay and grain costs on the rise and continuing drought immanent, many farmers and ranchers are looking to developing technology to assure the survival of their businesses. Although slightly counterintuitive, hydroponic food production has proven to be a great way to reduce overall water usage and still harvest a wonderful crop. CropKing’s hydroponic fodder system has been steadily gaining more interest as a feasible method for farmers to grow their own feed in order to greatly reduce their overall feed costs.

CropKing is a family owned company based in Lodi, Ohio that has specialized in hydroponic greenhouse production for almost thirty years and pride themselves on being on the forefront of hydroponic technology. Although hydroponic fodder doesn’t necessarily need to be grown in a greenhouse the growing concepts remain the same. This hydroponic fodder system utilizes a NFT style channel very similar to CropKing’s lettuce systems, but much wider. In this type of system a small film of water is dripped into one end of the channel and moved over the plants roots via the slope of the system. For fodder production, barley seed is spread along each channel without the use of any sort of growing media and after seven to eight days these seeds emerge as barley spouts weighing nearly seven times their dry counterparts!

This process starts with the soaking of a high quality and contaminate free barley seed for eight to twelve hours. By utilizing a clean seed the risks of future mold infestations are reduced. After the first couple of days roots and shoots have started to emerge from the seeds and by day four the barley leaf blades start to expand. At this point the grass begins to use its ambient light to start a little photosynthesis and really start to get going. The light levels required by barley at this stage are no nearly as high as many other hydroponic crops, making this system easily accessible for a range of growers. A pump recirclates the water throughout the system on a predetermined schedule, dependent on the crop and the growing environment. At harvest the barley forms such a dense matt that it is easily removed from the channel in smaller sections and then rolled for easier transportation to the feeding location. 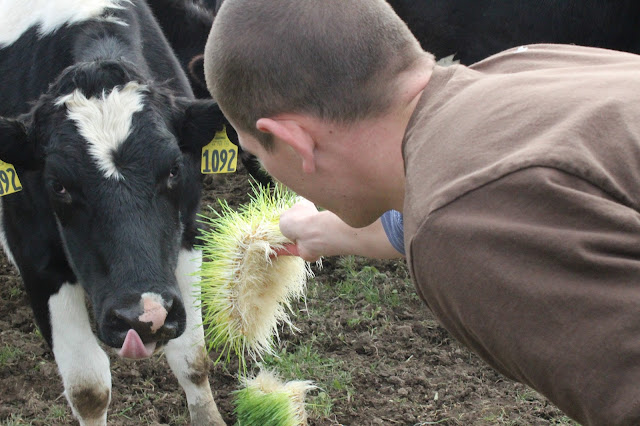 Hydroponic fodder sprouts are extremely nutritious and can be used to feed a huge range of animals from cows, sheep and goats to chickens and alpacas! Because much of the nutrition within the sprouts is so readily available it is often recommended that it be paired with a roughage type feed in order to assure a healthy animal gut. That being said, the quality of the roughage can be greatly decreased by virtue of the hydroponic fodder’s richness. The ability of a farmer to produce such a high quality feed while saving water and reducing the land requirements can go a long way to “drought-proofing” an operation as well as means to increase animal stocking density. CropKing is currently conducting research on the nutritional aspects of hydroponic fodder as well as engineering new ways to maximize the productivity of their systems.