Shelter from the Storm

When the hail started falling in Grinnell, Kansas, there were plenty of disappointed people looking toward Dan and Carol Buck’s 4B Farms. That’s because their CropKing greenhouse wasn’t just standing — it was unpierced, none of the ice shards came close to cutting into his facility.

“I had a lot of big farmers watching me, thinking that first hail storm would be the end of my greenhouse,” Dan said.

Those watchful eyes were quickly disappointed. None of Buck’s crops have been affected by turbulent weather. If anything, Buck was proven right.

“My theory was that I’d be able to roll right on through the storms, and keep on harvesting. I thought the other farmers might be done in by the hail,” he said. And they were. He said he saw many people lose their corn crop.

Northwest Kansas’ climate can be inhospitable. Farmers have to conserve their resources, because water is scarce. Sitting in Tornado Alley means there’s plenty of big bad storms that roll through the region. There are thunderstorms, sure. For Buck though, the big concern was the dropping of ping pong ball-sized hail followed by egg-sized ice shards.

He was especially concerned because he had just decided to invest in a greenhouse.

Surrounded primarily by corn farmers, Buck wanted to find a niche for his family farm. He owns about 160 acres in Grinnell, and about 30 acres are farmable. Most of that land is dedicated to growing feed for the family’s horses and goat herd. Dan wanted to diversify, he wanted to find an unexplored market.

So he considered greenhouses and NFT systems. He burrowed into his research, met with growers in other regions that had installed similar systems, and weighed the pros and cons. He knew that whatever structure he settled on, it had to withstand Grinnell’s weather. It had to repel the hail.

He stumbled onto CropKing’s products. He couldn’t remember how he found their greenhouses, but he was happy he did.

“We were sold on the construction,” he said. “CropKing knew what they were doing. They had help there. They had a definite design and a definite idea of how to do it.”

Buck is currently focusing on his romaine lettuce crops (he’s benefited from being a local grower, unaffected by the FDA recall). He’s still working to perfect his NFT system, but he’s had a year to adjust his climate settings and the minor tweaks have helped.

“It’s a world of difference,” he said.

Still, even as he become acclimated to his climate system, he was worried about the hail storms. The past 12 months were particularly brutal, he said. There was one stormfront that seemed to situate right above his farm.

“On the radar it looked like a little purple pinhead,” he said. One Saturday, the storm turned savage quickly, evolving from smooth hail to jagged ice shards.

On Sunday, Buck and his family were examining their crops. Not one shard of ice had made it into their greenhouse. Their NFT system was untouched.

“Nothing came through, it never touched a crop,” he said. “The next morning we had a crop to harvest and a lot of guys around here didn’t. It impressed me.”

After the storms, Buck’s 4B Farms Facebook page blew up and attracted more than 1,000 followers. He’s working on possible deals with several large Kansas institutions, each interested in acquiring safe local crops, grown in a reliable greenhouse. Between the recent FDA scare over Romaine lettuce, and his greenhouse’s perseverance in the storms, Buck is hoping his niche isn’t just here to stay — it’s soon to grow.

Find videos of 4B Farms greenhouse construction and follow along with their business here. 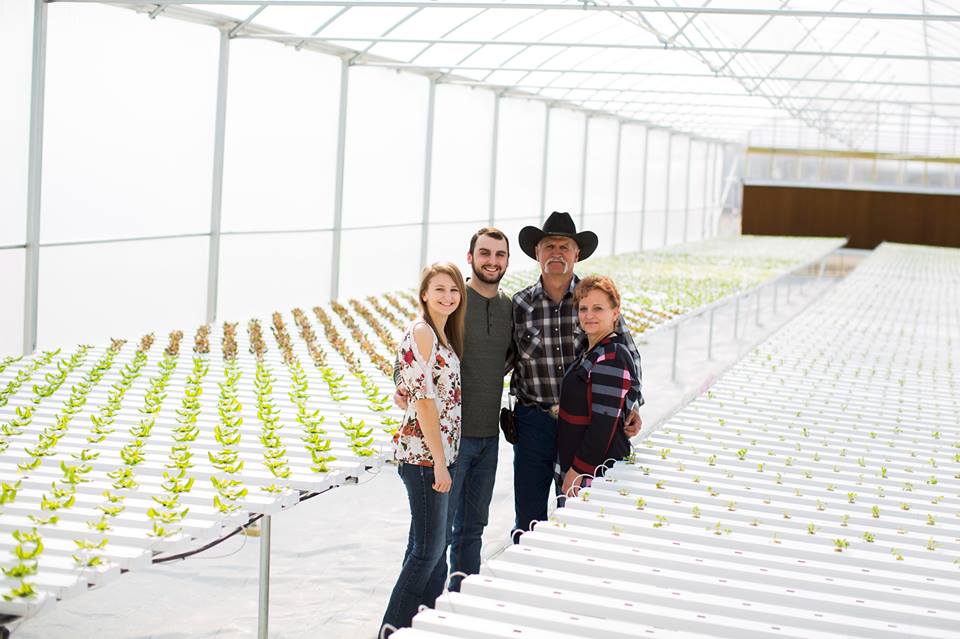