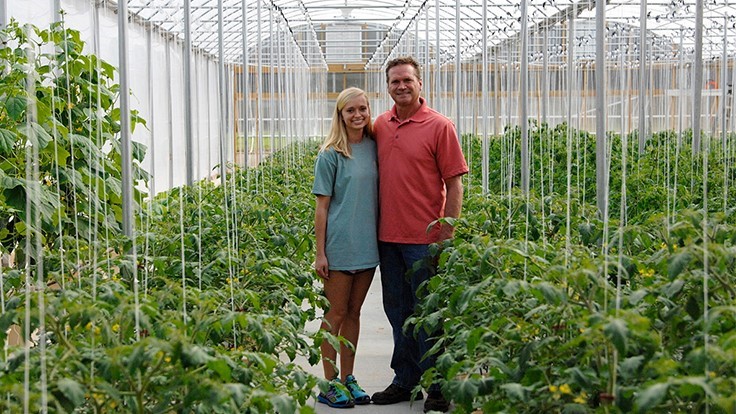 Ralf du Toit grew up in South Africa and served in the military, where service was required, until 1989. He was injured, and in 1989 and 1990, ended up working on a hydroponic farm. “It was a rose grower who developed different rose varieties with hydroponic systems — and that’s where I learned about hydroponics,” he says.

After more than 20 years out of the business — and most of it spent raising a family in the United States — du Toit fulfilled an enduring passion for hydroponics, and he began his own operation, Extreme Green Farms, in Auburn, Alabama. He provides produce to Auburn University and various restaurants in Auburn; Montgomery, Alabama; and Columbus, Georgia. His customers include Acre, owned by “Iron Chef Showdown” winner David Bancroft, and Amsterdam Cafe in Auburn; Central in Montgomery; and 11th and Bay in Columbus.

Du Toit grows lettuce, microgreens, tomatoes and cucumbers in a three-bay gutter-connect house and a hoop house that he bought from CropKing, and two more high-tunnels that he bought used, all of which he set up himself. He uses CropKing’s NFT, bato bucket and microgreens systems. He also has a deep-water system he built.

A love of hydroponics

After moving to the United States in 1992, du Toit lived in Atlanta and worked in computer technology and support for companies such as American Express, Xerox and SunTrust Bank. He says land wasn’t readily available in Atlanta, so hydroponics didn’t present itself as an opportunity there. But he still thought a lot about it.

“From when [my children] were little, my wife would always joke with me, and she would say to the kids, ‘What does Daddy say?’ and they would say, ‘Hydroponics,’” du Toit says. “They didn’t know what it meant or anything, but it’s just something that’s always been on the tip of my tongue and always in my thoughts and my mind, and something that I enjoyed when I did it back in the day, and always thought that I would want to get back into it and do it again.”