Growing animal feedstock hydroponically is a relatively new trend even though the process has been around since the 1930s. There are several advantages to growing fodder hydroponically and some disadvantages which we will discuss later. The main advantage is that animals get feedstock that has no pesticides or herbicides, is of high quality, and uses very little water. The most common sprouting crop is barley, although alfalfa, clover, corn, cow peas, oats, sorghum, and wheat are possible grains to grow fodder. Sprouting increases fiber and breaks the grain down into more consumable parts. Typically, the seed is spread in a wide channel and kept moist. In a few days it will sprout and in a week or so it will become a six- to eight-inch high mat. The mat of fodder is then cut into manageable lengths and rolled up.  The mat of roots, and green foliage is fed in its entirety to the animals.  The advantages of growing fodder this way is that there are no big land requirements and you can always feed fresh grass with minimal water usage. Recycling the water is not always the best method, because there is so much sugar in the grain that the tank can become fermented and contaminated pretty quickly.  Often that waste water can be used for other purposes such as feeding animals or irrigate gardens or lawns.

The usual set up is to have a bank or rack of 12’ long growing channels stacked six levels of four channels per level, for a total of 24 channels.    During that first 8 days, very little light is needed as the energy for growth is in the seed itself.  The fodder must be harvested by 7-9 days.  If left in the channels for longer than 8 days, the foliage begins to yellow from lack of light.  With a 24 channel system, 3 channels would be harvested, cleaned and replanted every day.  When growing barley fodder, each 12’ channel would be planted with about10 pounds of seed quality barley which has been soaked overnight to help with faster germination.  After 8 days the weight of the fodder per channel with be about 70 pounds of fresh fodder. This design allows a grower to stagger production and give livestock fresh fodder every day. In addition, it takes up very little space, approximately 200 square feet. 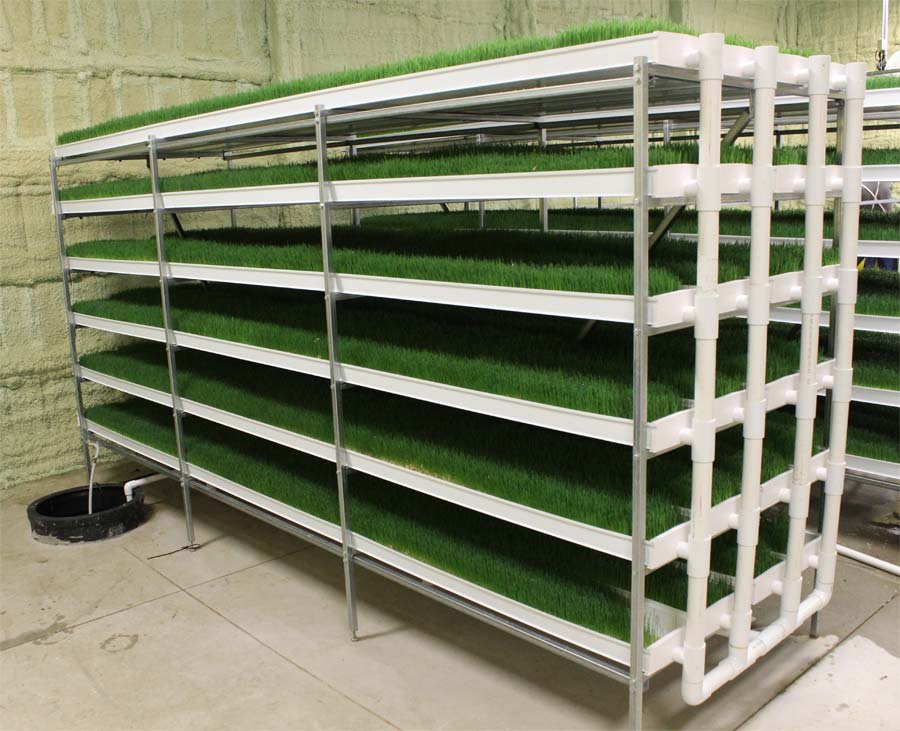 FodderKing by CropKing is available in three sizes.  The largest is the 12-24 which is a total of  13' long, 4' wide, and 6' 4" high and can grow up to 210 pounds of fresh barley fodder daily (harvesting 3 channels per day and replanting).  The rack has an irrigation pump and timer for feeding.  The channels are made of food grade PVC channels supported by a galvanized rack structure. This rack is designed for space efficient production. There are two smaller units also available, the 6-24 (24 channels each 6’ long) and the 4-8 (8 channels each 4’ long).

The seeds that you select for your hydroponic fodder system must be clean, and unbroken seed.  They need to be seeds that are meant for growing or “seed” quality and not “feed” quality.  If you start with broken seeds, they probably will not germinate and then begin to mold in the system.

One of the most important considerations to starting a fodder growing operation is the availability of the seeds.  When you consider that each 12’ channel starts with 10 pounds of seed that means for every rotation you will need 240 pounds of seed.  Being able to purchase the seeds during the fall of the year when they are harvested and have a safe, dry location to store them is important.  When you are looking for seed quality, make sure that the seeds have not been treated.

To plant the barley seed, soak them for 5-8 hours and then rinse seed to remove some of the sugars.  Spread the seeds about ½” thick on the bottom of the channel, as evenly as possible. 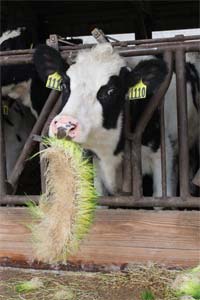 In just 8 days, barley fodder is ready to harvest.  If you leave it longer than 8 days, thefoliage will begin to yellow because the light requirements increase.  At this stage the entire mat of seeds and foliage can be removed from the trays and fed directly to your animals.  Allow the mat to dry out some and don’t water for 2-3 hours and roll up the mats for ease of handling.  Clean your fodder tray and start the process over again. Your animals will love you for it!