Hydroponic lettuce production in the United States now encompasses a wide spectrum of lettuce types and cultivars. While Bibb cultivars still occupy a large percentage of the market, many growers are also seeking attractive and distinctive lettuce cultivars to meet consumer demand. Due to these factors, leafy cultivars, including looseleaf and Lollo types, are becoming more common in hydroponic greenhouses. However, some of these cultivars have been more often grown in soil based systems, and there is a need to better understand their performance in the greenhouse. Consistency in both productivity and timing is important for greenhouse growers, and seasonal conditions can have a large impact on cultivar performance. Trialing of available cultivars under differing conditions is important in informing grower decisions. Important points of evaluation are growth rate, yield and visual coloration. The goal of this set of trials was to evaluate a selection of leaf lettuce cultivars through a range of late fall, winter, and early spring conditions to evaluate their potential for greenhouse growers in the Midwest and northeast. Cultivars were obtained from varied seed suppliers to represent a broad selection of cultivars available to lettuce producers.

Primed and pelleted seeds were seeded by hand in pre-moistened 1” x 1” x 1 ½” rockwool cubes. Seeds were germinated in clear water in seeding trays in the nursery. Nutrient solution was added in the nursery 7 days after seeding and lighting was used for the seedling phase (T5 florescent fixture) and seedlings were grown in flowing nutrient solution in the nursery for approximately two weeks before transplanting. After transplanting, lettuce plants were grown out in the channel for five weeks prior to harvest. The nutrient solution was continually cycled through the CropKing Fertroller where automatic pH and EC adjustments met programmed solution set points. The pH was maintained at 5.8 by the addition of dilute sulfuric acid. EC was maintained at 1.8 by the addition of concentrated fertilizer solution and source water.

* It is important to note that these trials were carried out over set periods of time and harvests were made regardless of plant readiness for sale. Clear comparisons were the main goal, and this resulted in low weights for some cultivars. Also, no supplemental lighting was used after transplanting even under these low light northern conditions. In a commercial operation, more time would have been give these heads to reach a saleable size or lighting would have been added to increase growth rate and crop quality. 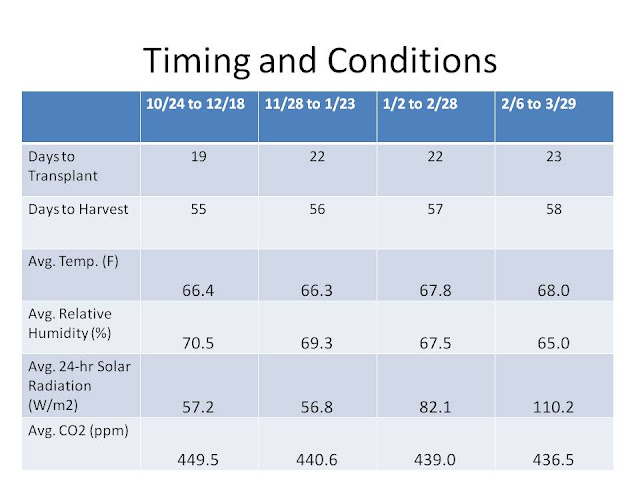 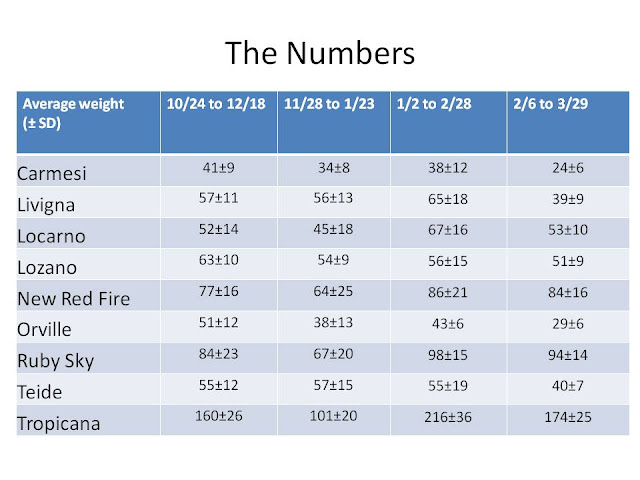 There are always many interesting observations from cultivar trials carried out across different seasons.  From these trials, I would like to make a couple observations in addition to the common trends of 1) decreased growth under lower light/winter conditions, and 2) more dense, compact, and more deeply pigmented lettuce grown under higher light levels.

The first important take-away from these cultivar trials is the importance of understanding your customers and market demands when selecting a lettuce cultivar. While it is a generally true statement that different lettuce cultivars grow at different rates, these differences can be clearly seen in this selection of leaf lettuces. For example, the Tropicana cultivar is a typical green leaf crop sold for soil production that can also be grown in the greenhouse. As can be seen in the images and yield numbers, this green leaf lettuce has a more rapid growth rate than the Lollo Biondo (blond, such as Livigna and Lozano) or Lollo Rossa (red, such as Carmesi and Orville) 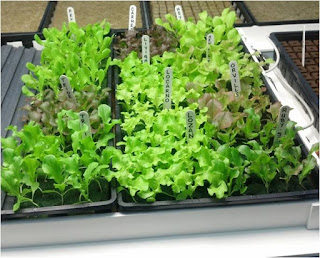 cultivars in the evaluation. The Lollo lettuces were bred and developed for specialty markets and have attributes such as color and texture that are not present in some of the other common leaf cultivars. On a per-plant basis; however, they may not produce a similar sized crop in a similar time period. Conversely, the smaller size of some of the Lollo cultivars may make them more appropriate for a leaf mix where their growth will not be too rapid for other varieties in the mix. These are just some of the factors that are important for growers to keep in mind as they select cultivars. 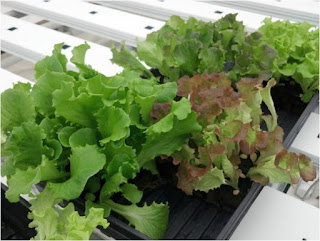 The second thought worth mentioning is best explained using pictures. These two images illustrate some of the impact of crop management on yield and production. The image on the left shows transplants at an appropriate size for transplanting (run 1) while the image on the left shows plants that are larger than optimum (run 4). In our greenhouse we typically transplant when the plants are similar to the size on the left. However, as sometimes happens, schedules and other jobs encroach on our work and we transplant a few days after optimum. Older transplants can be more stressed and take a little longer to transition to growth in the channel. This increased plant stress could be a key cause of the similar or lower weights observed in run 4 as compared to run 3 even when light levels were higher in run 4. So, proper cultivar selection should be paired with timely and appropriate management to obtain the best crop. 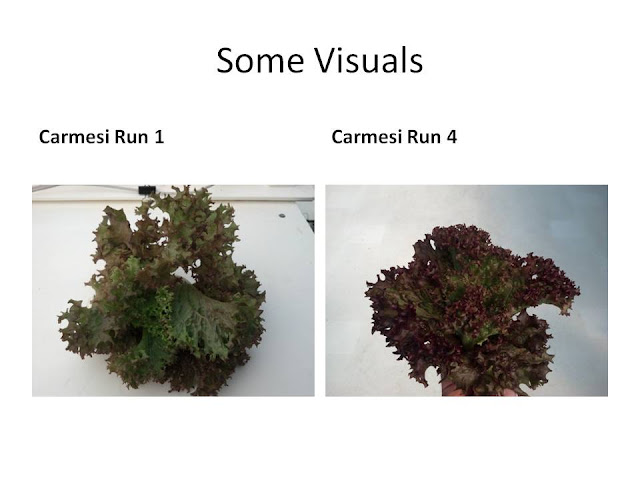 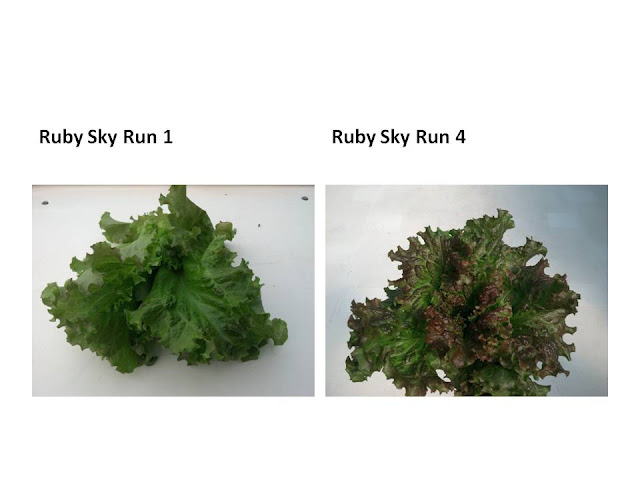 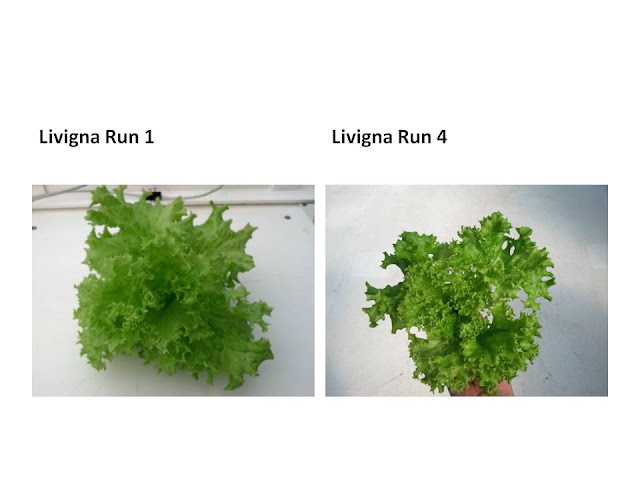 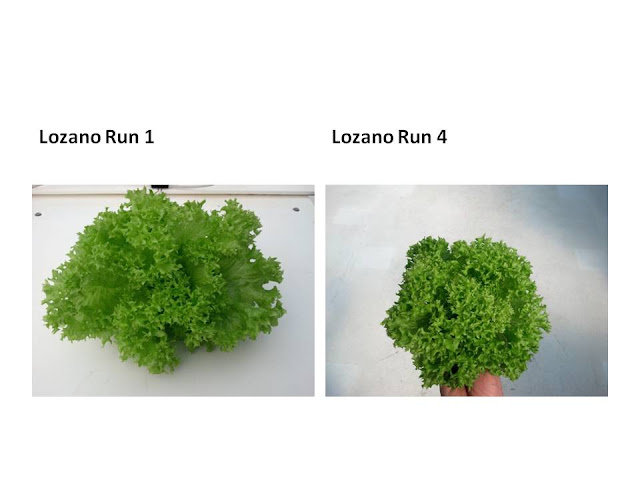 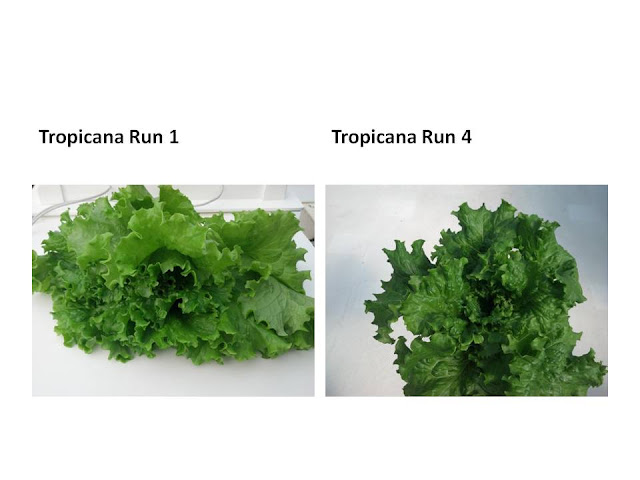