Kale, endive, and cress in NFT production in Ohio

While lettuce fills a large majority of the spaces in most greenhouse nutrient film technique (NFT) systems in the US, there are many other crops that can be profitable for growers in these systems. In addition to herbs, other leafy crops, such as kale, cress and endive are currently being investigated by growers to address specialty markets. In recent years, more growers are experimenting with these varied leafy crops. However, less is known about crop productivity and timing in relation to both cultivar and seasonal impacts. It is also important to note that unlike bibb and some other lettuce types, most kale, endive and cress are not specifically bred and developed for controlled environment production. So, there is a potential for greater seasonal variability in production than is seen in some of the common bibb lettuce crops. This trial was designed to evaluate a selection of kale and other leafy crops through a range of summer to fall conditions to evaluate their potential for greenhouse growers in the Midwest and Northeast. This trial obviously only used a portion of the cultivars available, but was intended to provide information for future more extensive trials.

Seeding was done by hand into pre-moistened 1” x 1” x 1 ½” cubes. Seeds were germinated in clear water in seeding trays, and were transferred to the nursery and nutrient solution 3 to 5 days after seeding. Seedlings were produced in flowing nutrient solution in the nursery for an additional week to two weeks before transplanting (No supplemental lighting was provided during the seedling phase). After transplanting, plants were grown out in the channel until harvest. The nutrient solution was continually cycled through the Fertroller where automatic pH and EC adjustments met programmed solution set points. The pH was maintained at 5.8 by the addition of dilute sulfuric acid. EC was maintained at 1.6 to 1.9 (lower light levels = higher EC) by the addition of concentrated fertilizer solution and source water.

* It is important to note that these trials were carried out across a range of seasonal conditions, so transplanting and harvesting were completed at slightly different plant ages in different runs as detailed in the next slides. Additionally, this trial measured single harvest yields to produce the most accurate and comparable yield totals. However, some growers will take multiple harvests from a single kale or cress plant, which would likely increase the total yield per plant but require additional time in the channel. 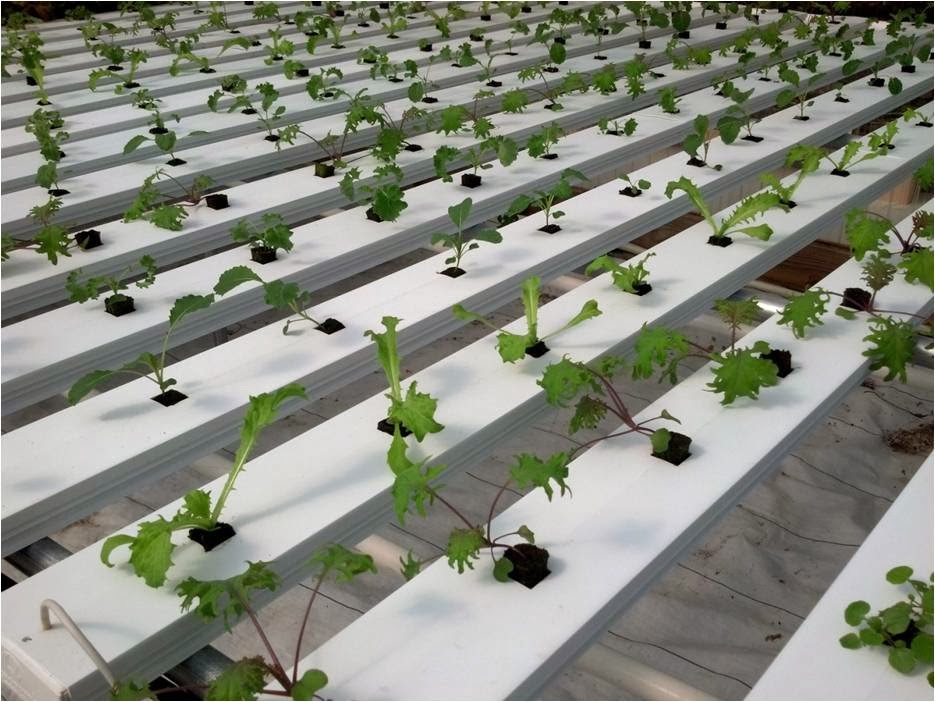 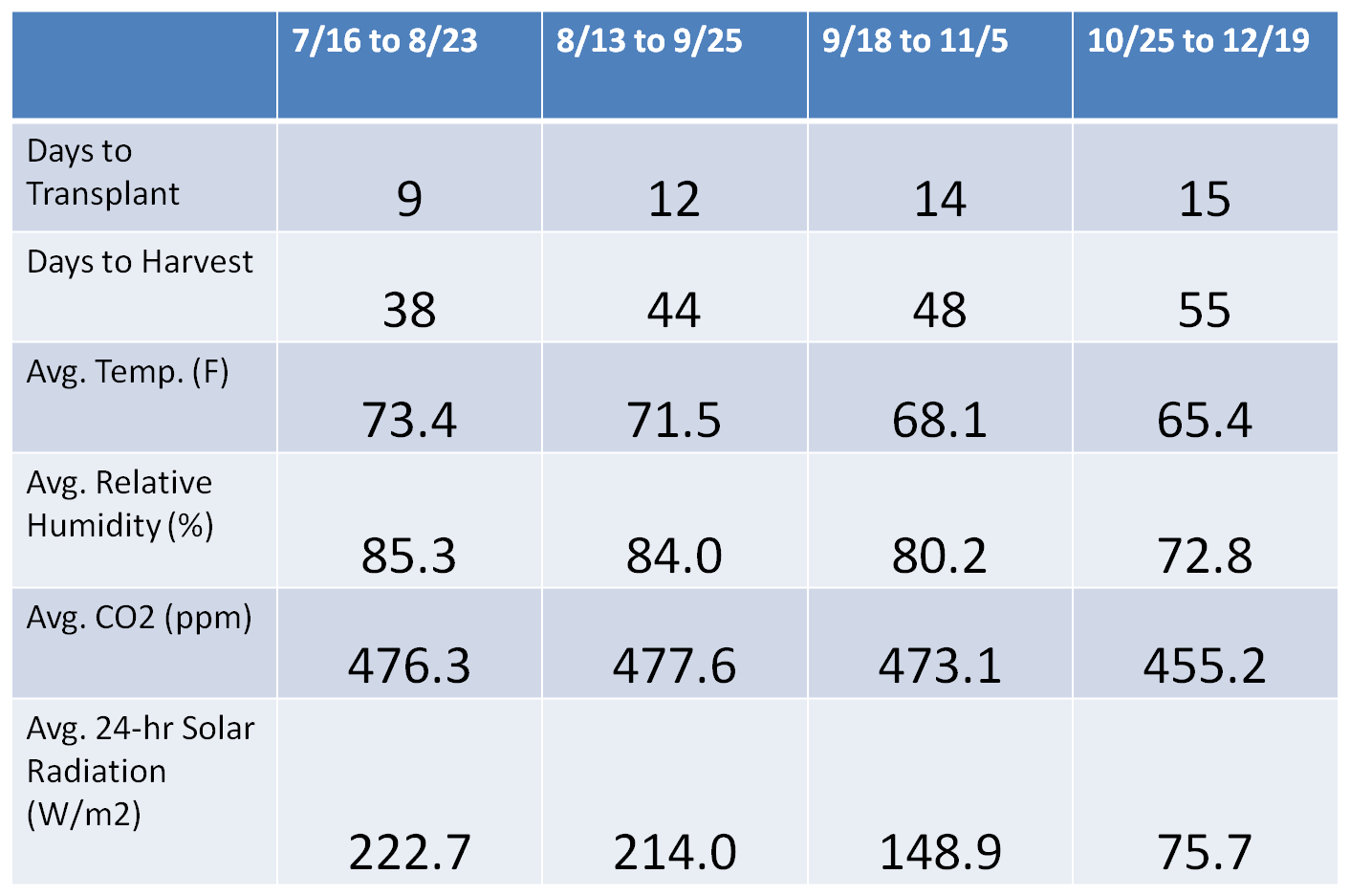 * Watercress was seeded with multiple seeds per cube as is typical in production, but this increased the yield variability. Additionally the multiple plants grew together and created difficulty in accurately assessing yield per cube, so those comprised data are not presented, and a more upright cultivar was chosen for the next two runs of the trial.

Some thoughts on the trial

After reviewing these data, there are a few items that are important to consider and understand about this trial.

• An important trend to note in these data is that the leafy crop cultivars in the trial did not always respond similarly to changes in seasonal conditions. Red Russian kale, which had the largest leaves and plant stature, tended to be the highest yielding kale cultivar and the yields across the first three runs were consistent. Under lower light conditions in run 4, the yield dropped to near half even with the longer production cycle. That same trend was also true for the smaller leaved Toscano cultivar. Starbor kale yields were more variable across the three first runs. In run 4, Starbor seeds could not be obtained, so Winterbor kale replaced Starbor. In future trials, it would be a good comparison to trial both Starbor and Winterbor across changing seasons.

• Seedling production was a key factor in this trial. One important note about using seeds and species not specifically bred and adapted for greenhouse conditions is that germination and early growth may be more variable than growers may be accustomed to with bibb seeds. For example, the variation between endive yield in run 2 and 3 was more likely due to germination and seedling size than to environmental conditions. The photo on the left is a close up of some of the endive seedlings in that run, and it is apparent that germination was uneven. This difference in early growth and size at transplant has a direct influence on yield in a short cycle leafy crop. The more even seedlings from another run are shown in the image on the right. 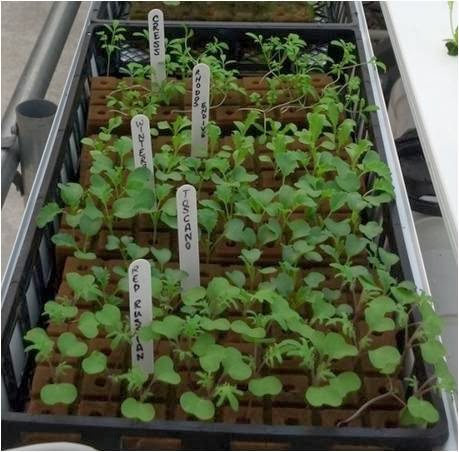 • My final comments are based on both data and observations and discussions with growers. When growing alternative leafy crops, like kale, endive, and cress, it is essential to know your market and select cultivars based on the needs of your buyers and your productivity. The cress is an example of that fact in that the highest biomass producing cultivars may have been less marketable due to their difficult to manage size. In the kale, there were large differences in cultivar biomass production and appearance. It may well be that the most desirable cultivars for buyers may not be the most productive. So, growers need to be aware of the production capacity so that prices can be properly established. This knowledge and preparation will enable growers to best capitalize on the demand for these less common leafy crops. 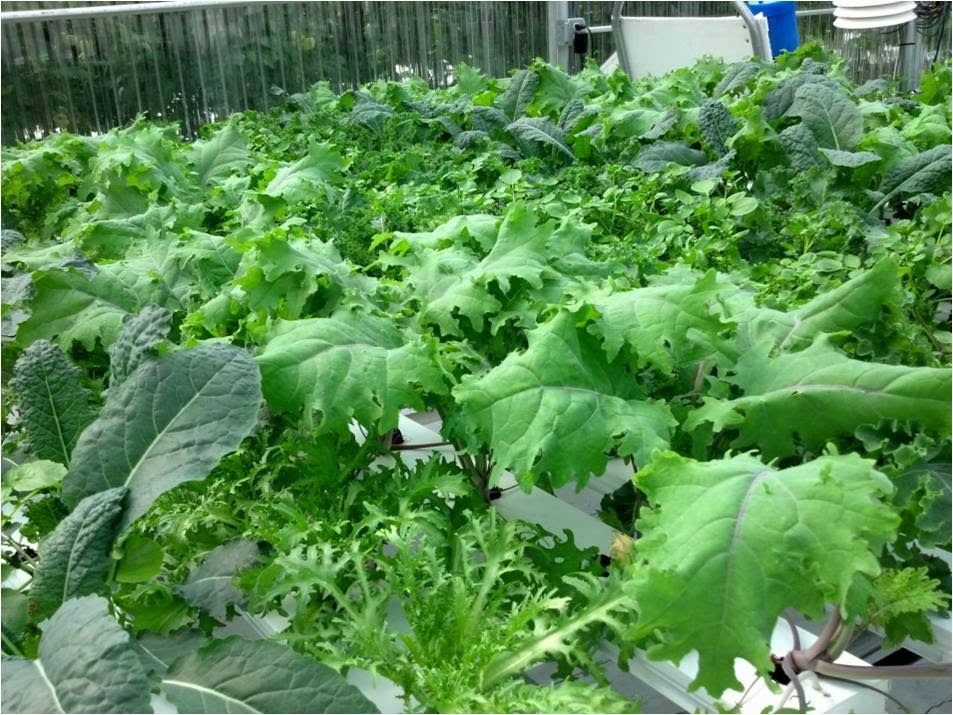