Dialing in on the Downy: Dealing with Basil Downy Mildew in your Greenhouse

Basil downy mildew (Peronospora belbahrii) is a disease that is rapidly getting the attention of many of hydroponic greenhouse growers. Over the last couple months, we have heard from growers in several states who are now facing this disease. So, I want to take an opportunity in this blog to introduce growers to the threat and present some information as well as sites for further research. Knowledge and preparation are some of the best steps to prevent or mitigate losses in our greenhouse

In the continental US, reports of basil downy mildew were first confirmed in late 2007 and the disease has been widely distributed from 2008 onward. Significant crop losses in both outdoor and greenhouse production have been reported since that time for a couple reasons. First, a new disease situation can be a challenge because growers are less prepared for the appearance of a relatively new disease and the development of chemical or other control measures likely are not complete from a broad industry perspective. Secondly, any infection on the leaf can result in unmarketable crop due to appearance and rapid deterioration after harvest, so losses can mount quickly.

Basil downy mildew can be spread through seeds or airborne spores, so the disease can affect crops from multiple sources. Work is underway to develop and implement accurate tests to identify the pathogen on seeds and enable sale of disease-free basil seeds. This will be crucial to more effective control of the pathogen in the future, but growers must also be vigilant in terms of the threat from airborne spores. The pathogen can overwinter in warm areas (such as southern Fl) and can be distributed through airstreams as the growing season progresses. This means that the incidence and frequency of infection often moves northward during the late spring and summer months. Monitoring and reporting programs are available for growers to be better aware of when outdoor or greenhouse crops in their area have been reported with basil downy mildew. The first site listed in the additional information section at the end of this blog has info on the monitoring program. 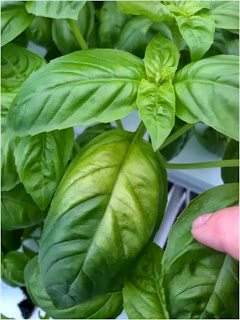 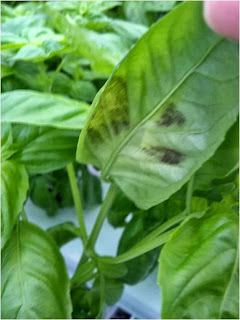 Early symptoms can mirror nutrient deficiency, so it is important to check for fungal growth under the leaf, which can develop only 2 to 3 days after infection.

The stages of impact 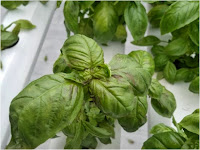 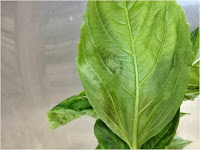 The image on the left illustrates early stage infection while the plant on the right has a more severe infestation that  render the entire plant unmarketable in addition to producing spores that will likely infect nearby plants. Impacts in a greenhouse can be severe as the pathogen can spread quickly under greenhouse temperature and humidity ranges because they are conducive to rapid multiplication.

Preventative steps fall into two main categories for growers. The first occurs in seed and cultivar selection. As discussed earlier, disease free seed is going to become increasingly available in the future. Additionally, it has been demonstrated in various tests that sweet basil (Ocimum basilicum) is the most susceptible to basil downy mildew. Red leaf basil as well as Thai basil and the lemon and lime basils have generally been shown to be more resistant than sweet basil.

The second important element in preventing the disease is controlling the environment in your greenhouse to minimize conditions that lead to the reproduction and spread of the disease. It will be crucial in the prevention and control of the disease to reduce leaf wetness by maintaining lower relative humidity and increasing air flow in the greenhouse. Such steps can include maintaining slightly higher temperatures to reduce relative humidity, increased lighting (or decreased shading), as well as increasing air circulation through addition of fans or some other method. 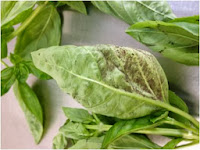 The important first step in addressing basil downy mildew is to determine the severity of infection. In some cases, removing the most affected plant material from the greenhouse may be needed as remediation of affected tissue is challenging. Infected plants often are completely unmarketable and may pose more risk than reward if left in the greenhouse. In some instances, the removal of a few plants may be adequate if the disease is caught in the early stages. How much of the crop with mild to moderate infection that should be removed is kind of a judgment call, but this is not known as an easy disease issue to control. Another step that can help if the older plants are highly infected is starting new seedlings in a separate area where the inoculum cannot

Spray and chemical options: There are not as many weapons as we might like in terms of spray materials for use in greenhouses for basil downy mildew, but there are a few tools at our disposal. Another thing to keep in mind is that these controls have been shown to be more effective as a preventative, so spraying to prevent infection on the plants that are still healthy is one of the most important goals.
In the organically certifiable or softer category, there are hydrogen dioxide products (Oxidate), biologicals (Actinovate) as well as potassium bicarbonate (Milstop) products. These are labeled for use in greenhouses and on downy mildew, but in tests have not generally been the most effective materials for controlling active infections.
In terms of conventional fungicides, some products that have been listed as most effective and labeled for greenhouse use are cyazofamid (trade name Ranman), phosphanates (trade names such as ProPhyt, Fosphite, and Fungi-Phite) and others detailed in the additional resources. It is best to alternate use of chemicals to try and prevent pathogen resistance. Further information of specific chemical products and 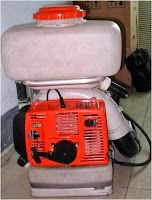 Remember, this disease is most effectively prevented rather than controlled. So, there is a need to spray both for control and prevention under conditions that are most conducive to the disease. One thing to keep in mind as you implement your control plan is that a backpack sprayer  is going to be difficult to get adequate leaf coverage because the underside of the leaf is where the pathogen is most present. If frequent spraying is needed, it is worth considering acquiring  some type of air assisted mist blower or high pressure cold fogger.

Arming ourselves with information, remaining vigilant in environmental control and scouting and acting quickly if disease is found are all key in managing the risk of basil downy mildew in our greenhouse crops.